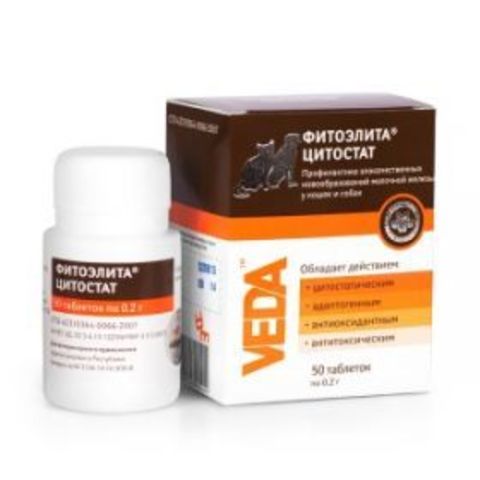 Cytostatic and adaptogenic agent of plant origin for cats and dogs, used in the prevention of benign and malignant neoplasms of the breast:

at the initial stages of breast cancer,
in the postoperative period,
for the prevention of false puppies in dogs.
FITOELITA® CYSTOSTAT refers to complex preparations of plant origin for the prevention of malignant neoplasm of the mammary gland in cats and dogs, as well as in the post-operative period as a cytostatic agent in cats and dogs and for the prevention of false puppies in dogs.
The mechanism of action of the drug is determined by phytotherapeutic activity of biologically active substances of extracts from plant raw materials.
The main active substances of the pterygium chaga have a cytostatic effect, delay the initial stages of the tumor process. Polysaccharides Echinacea have immunostimulating activity in functional immunodeficiency. The active substance of burdock - the lignin aglicone arctigenin possesses antitumor activity against tumors and metastases of the mammary gland. Indoles (dindolylmethane) broccoli stimulate the body to burn those forms of estrogens that contribute to breast cancer; suppress the growth, division and reproduction of breast cancer cells. Dindolylmethane increases the level of a specific protein that kills cancer cells and reduces the level of protein that maintains their viability. Hanerol kipreya has a wide antitumor effect, including in breast cancer. Oregano contains selenium (50 μg / g), which is part of a factor that prevents necrotic processes in the cells of the body. Phenylcarbonic acids of melissa and oregano-thymol, carvacrol possess adaptive properties that reduce sexual excitability. The active ingredients of the remaining components have a synergistic and symptomatic effect (adaptogenic, antioxidant, antitoxic).
Medicinal preparation FITOELITA® CYTOSTAT - by the degree of its effect on the body belongs to low-hazard substances (hazard class 4 according to GOST 12.1.007-76). The medicinal preparation does not possess cumulative, embryotoxic and teratogenic properties.
FITOELITA® CYTOSTAT is used by dogs and cats to prevent malignant neoplasms of the breast and in the postoperative period as a cytostatic, adaptogenic, antioxidant, antitoxic agent, as well as for the prevention of false puppies in dogs.
For the prevention of neoplasms of the breast in dogs, the drug is prescribed monthly 1 tablet per 10 kg of animal weight, in cats 1 tablet 3 times a day for 7 days.
In dogs with a malignant breast tumor up to 1 cm in size, the drug is administered in 1 tablet per 10 kg of animal weight, for cats - 1 tablet for 5-7 days 1 time every 3-4 months in order to prevent its growth and development. In the postoperative period, the drug is prescribed to the dogs 1 tablet per 10 kg of animal weight, to cats 1 tablet 2 times a day for 3-4 months.
In the presence of a growing benign breast tumor, the drug is used in the preoperative period for 3-4 days for dogs 1 tablet per 10 kg of animal weight, for cats - 1 tablet 3 times a day. After the operation, the drug is used for 10-12 days for dogs 1 tablet per 10 kg of animal weight, for cats - 1 tablet per day.
To prevent falsehood, the drug should be given to bitches from the beginning of the estrus to the anestrus phase (up to 21 days), 1 tablet per 10 kg of animal weight 1-3 times a day. This is also a preventative measure in relation to the development of a breast tumor.
After applying the drug, sometimes animals have a chill. Rarely, the temperature may rise. These reactions are physiologically adequate reaction of the body to the effect of the drug.

Before use, consult a specialist!